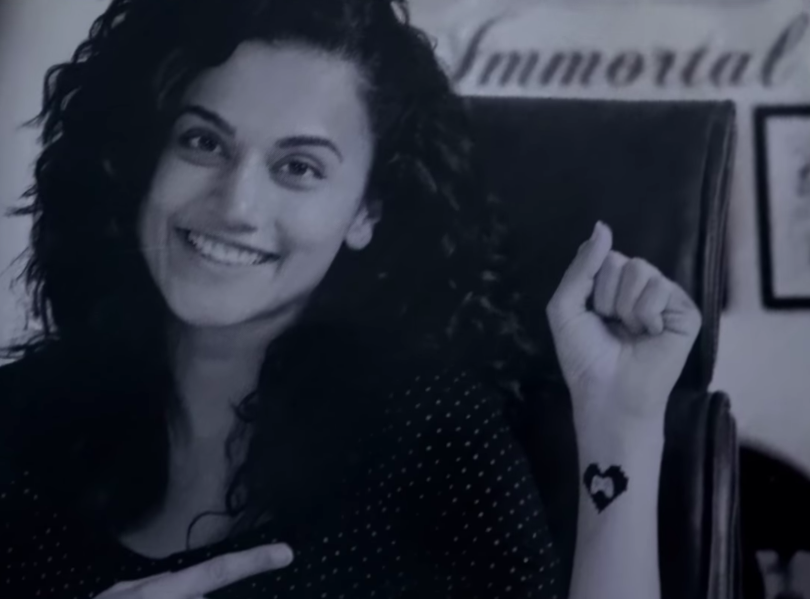 The horrors that you get to experience in Game Over are on a whole new high. Such an arresting act by Taapsee Pannu!

Swapna (an immensely powerful performance from Taapsee Pannu for the protagonist) is sharing her experience of fear and breathlessness, that she had inside a dark room, to a Doctor. While she does so, the camera steadily, slowly and quietly enters the room moving from right to left. In another scene, on the outside, Kalamma (Vinodhini Vaidyanathan), Swapna’s caretaker, can be seen from the window grills to be hanging the clothes out to dry. The camera, which is inside the room, leisurely moves towards the window producing an eerie feeling out of normal activity. And, in another instance, a close shot captures the lighting of a thick candle. Then there’s a slow-motion sequence in black-and-white where Swapna looks jovial while getting inked. During this, there’s a close shot of ink being dropped in a glass of water that gets slowly spread around and mixed up. Sometimes, inside a dimly-lit room, the camera cautiously moves towards a door creating a strange feeling. You also listen to the creak of a swing chair, as the camera ploddingly goes towards it, outside the house.

A. Vasanth’s cinematography is the very first thing that stands out as the film gives you glimpses of different elements of the story. Perhaps this is not anywhere close to the brilliant camera work of Alfonso Cuarón’s Roma. But it is definitely among the greatest works in Indian cinema. It just presented Director Ashwin Saravanan’s Game Over in a different light altogether. Of course, Ashwin’s vision is a big factor too. It’s not just the stupendous camera work that excites you but also how important these detailed shots turn out to be as the movie progresses.

The core of the narrative in Game Over is about incidents of some unknown men taking videos of women while torturing them, beheading them and then burning their headless body. One of those women in the film, who ends up being the target of these men, is Swapna. The film does not dwell too much on this character’s life. We take a gander at her past life where she is seen to have been kept in captivity inside a dark room and being tortured. This agonising incident is etched in her memory so much so that she finds herself in a state of terrible uneasiness when she encounters darkness inside a room. The tattoo, that she has on one of her forearms, resembling a video game controller, as she is a game freak, turn out to be a memorial tattoo that contains the ashes of a dead woman. Towards the intermission, the film can make you feel a bit of restlessness as Swapna’s fear of dark room and being a victim of torture (that never gets elaborated but only shown briefly) may seem repetitive and dragged a little. Even the tattoo is used as something that can add sentimental value to the film (The dead woman’s mother comes to see Swapna and have a feel of the memorial tattoo as it contains ashes of her daughter but it doesn’t move you because the focus was never really on building the story of this dead woman character).

Ashwin decides to finish off the first half of the movie with a message on the screen that says, “Game On”. Well, it literally means ‘What if life is a game’ (You will understand why when you see it). It’s the post-interval part that keeps you on the edge of the seat with your eyes popping out and mouth wide open in fearfulness. Every detailed camera shot that you saw in the first half will start finding meaning in the second half. There’s a headless body sitting in the swing chair. The head cut off from the body is thrown at the window. Swapna’s fear of darkness comes to the fore and this time with even more intensity. Men, all covered up in a black outfit, carrying daggers, don’t just sit on the couch and give a villainous look but also slit the throat instantly. The thick candle shown earlier comes into play as well as it, along with a flammable oil, is used for setting fire on one of these men and burn them.

The amazing music by Ron Ethan Yohann gives a boost to thrilling sequences in the film. The film is, one might say, India’s answer to Jordon Peele’s Get Out. The horrors that you get to experience in Game Over is on a whole new high, just like Get Out, but it also comes at a price. Like Get Out, amidst the shockers and thrillers, you may feel some of the elements not fully developed and left half-baked. But you won’t be thinking about all that after such an arresting act by Taapsee Pannu and heart-stopping experience that you get while watching this film.